I’m not perfect, but I had always thought that the level of rubbish I created was not that bad.

Okay, that’s a lie. I had never thought about the level of rubbish I created because I assumed that it was not that bad. After all I used moon pads, a bamboo toothbrush, and reusable bags! Gold star for me!

My rubbish trail was brought back into my awareness when I caught Cheap Lazy Vegan and Tidy Guy’s Trash Audit videos on YouTube. To summarise: CLV was asked to consciously minimise the amount of trash she created, and was given a jar to collect her trash in. At the end of the week, the pair of them reviewed the jar’s contents. The videos are really worth watching.

I thought to myself “I should try this. How much rubbish could I possibly create?”

Here is a selection of just some of the rubbish I produced. 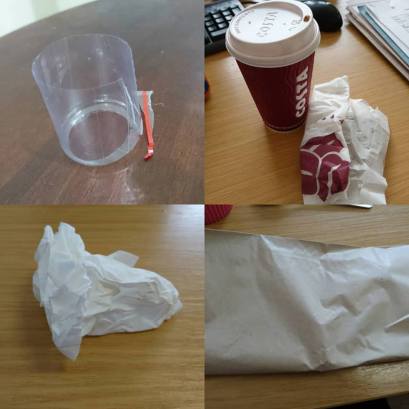 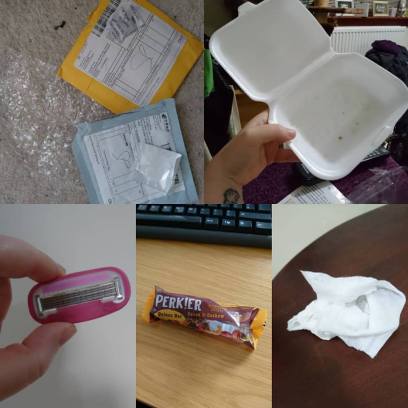 I am not going to list all of my rubbish, because I am embarrassed. It really hit my shame button. I realised how lazy I am, and how much I prioritise convenience.

During the week I did my audit, the bulk of my waste came from food. Many of the cakes, biscuits, and cereal bars I eat come in single-use plastic wrappers. I have a terrible sweet-tooth, and rely on sweet treats to get through my days. I also have a bad habit of ordering takeaway food for dinner because I am too exhausted to cook at night. Most of the food I order does come in recyclable containers, but then there is the dreaded polystyrene packaging. I have been trying to ensure that I eat more fruit, so I have been relying on precut portions that come in wee plastic bags. Finally, I have been trying to motivate myself to leave the house (for work or a walk) by picking up a takeaway hot chocolate on my way.

The rest of my waste came from personal care. My permanently runny nose and my sloppy eating habits mean I use a lot of tissues and kitchen roll. Then there was the security wrappers and blister packs from my medication. Finally, there was my razor blade. This was frustrating! I had switched from disposable razors to ones were you reuse the handle thinking that it would use less plastic. I was wrong! The blades come in so much plastic packaging!

Of course, different weeks bring different waste! Since doing my audit I’ve noticed that I use a lot of microwave rice (which comes in plastic pouches), and that my internet shopping comes in a variety of packaging. Some of it I reuse, but there are too many single-use plastics for my liking.

So where do I go from here?

I’m really glad I did my own trash audit. Facing up to the impact of my lifestyle has been hard, especially as I have been relying on my illnesses as an excuse to be a slob. I am positive I can change though. Looking at my habits and my rubbish this closely has helped me draw up an action plan on where to go from here.

I hope to keep you all updated on my low waste journey!